This past week I had the honor of teleprompting for the former Prime Minister of the UK, Tony Blair. The occasion was a private event under the auspices of the Tony Blair Faith Foundation. 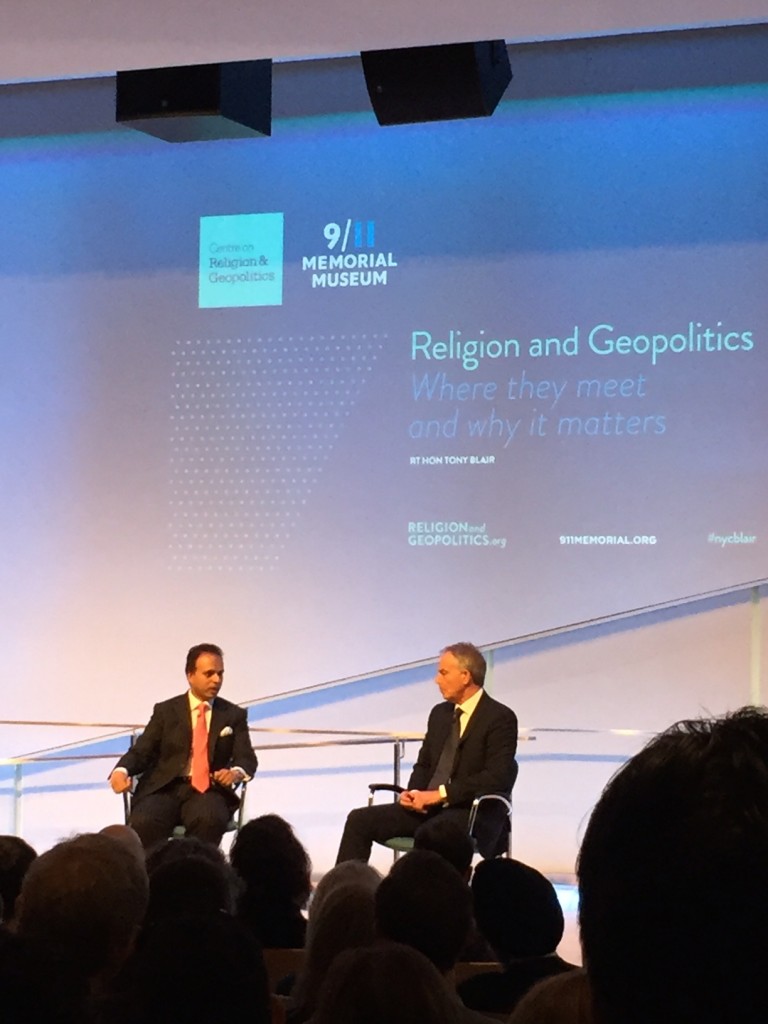 Tony Blair at Religion and Geopolitics event in NYC.

It took place at the National September 11 Memorial Museum. This site was chosen in part because it stands as a reminder that the world will “never forget” the terrorist attack on that frightful day. 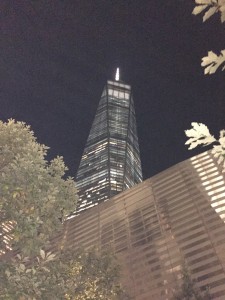 The National September 11 Memorial is a tribute to the the nearly 3,000 people killed in the terror attacks of September 11, 2001.

It is well worth a visit.  The twin reflecting pools sit exactly where the Twin Towers once stood majestically.

On the edges of the pools are bronze panels inscribed with the names of all who perished.

More than 90 countries lost citizens in this brazen, dastard attack.

BBC America was filming the live coverage of Mr. Blair’s speech and Q & A afterwards. The topic was Religion and Geopolitics, the main focus of Mr. Blair’s interfaith charitable foundation.

I arrived a day in advance to obtain all the proper credentials at the heavily guarded Freedom Tower in downtown Manhattan.

After that, I met the head of the Audiovisual Department for the Memorial Museum.   We discussed the best way to set up the Presidential Teleprompters. 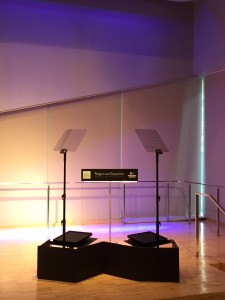 Nothing complicated here, it is placed on the left and right corners of the main podium.   Said setup went according to plan. Our clients were duly impressed with the unobtrusive, aesthetically pleasing setup.

Mr. Tony Blair, experienced both in terms of politics and public speaking, would address the nation and, indeed, the world on Geopolitics and Religion from here.

I worked closely with Claire Lorentzen, an accomplished professional in many areas. She is currently the project manager of the Tony Blair Faith Foundation and in charge of this particular live event.  She was eager to help in any way she could.

We went over several aspects of the event and made a point of measuring the one-way glass mirrors and calculated that they had to be at a perfect 54 degree angle given Mr. Blair’s height of 6 feet 2 inches exactly. It was a pleasure to interact with her.

On the day of the event I arrived an hour early to verify that all was in perfect working order.

I went through and performed all the usual back-up duties. I checked the power supplies of the two to one VGA converters, safely gaffed taped 100 feet of cabling across the lining of the floor wall to the area from where I was teleprompting, and lastly, carefully fastened all my 6 plug-ins for redundancy.

I was given the speech only 20 minutes prior to the live event and had a lot of formatting to do rather quickly.

The client apologized for the lateness, but it was out of her control. At the last minute changes were made. She could not give me the document any sooner. It was up to me to work quickly and accurately. I remain calm in these situations. I’ve learned to work fast and adjust to any situation over the years. Experience does count! I had to proof read and reformat the script for the thirty minute speech for the Script Q teleprompter software. The live speech being filmed was beginning in twenty minutes. Time is of the essence, as they say. It worked out well, I am happy to say.

I was amazed and excited to have a full 5 minutes with the affable Tony Blair one-on-one. We took a cursory look at the speech, made a few edits, and we felt ready to go! I took another second to adjust the poles of Presidential Teleprompter poles and that was it!

Mr. Blair shook my hand, said it was nice to meet me. I returned the sentiment and we went to work.  Teleprompting for such dignitaries is always interesting and I must admit often feel awe struck!

His impassioned speech dealt mostly with the terrorist attack of September 11th, 2001 and how it changed and destroyed lives.  Of course, he talked about the ramifications of such a cowardly, destructive act. Reverberations are felt today worldwide.

It was personally difficult to be there without feeling an immense emotional connection to the victims, all the families, what my city went through and remembering the close friends I lost that day.

Mr. Blair spoke eloquently and passionately about his foundation. Its stated goal is: “We provide the practical support required to counter religious prejudice, conflict and extremism in order to promote open-minded and stable societies.”

It is now active in over 20 countries. A lot of his initiatives focus on religion and geopolitics and their relationship to the connected issues of terrorism.

The dedicated Mr. Blair closed his speech by adding: “…To deny the religious dimension of terrorism is to misunderstand the problem and therefore inevitably misconceive the solution. This perversion of Islam can and will be consigned to the same junkyard of mistaken ideology as the secular ones of the 20th Century. But it has to be defeated. And to defeat it, we must first understand it”.

I think this is an interesting approach to defeating terrorism.   I was happy to be a small part of this historic day.

I trust you’ll enjoy them.

Thanks for reading. Look out for my next blog!

Check out our Presidential Teleprompter setup and images from the actual event.