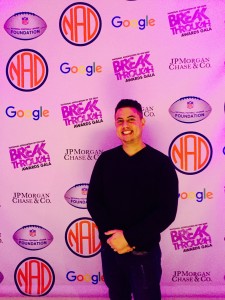 This past week American Movie Company & TelepromperRental.com were hired to provide teleprompter services for the 2015 Break Through Awards Gala of NAD (National Association of the Deaf).

I had the important and challenging task of being both the Presidential Teleprompter Operator and assistant director during rehearsal.

I was delighted to be a part of this momentous gala that recognized breakthroughs in the arts, in the media, on Broadway, in technology, and throughout society. 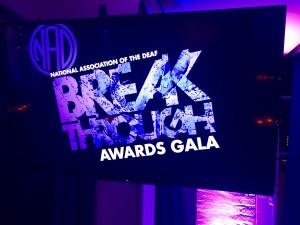 There were six wonderful presentations and impressive honorees with whom I worked closely.  A leading voice at this Awards Gala was the CEO of NAD, Mr. Howard Rosenblum.  He has an impressive resume. He’s been a lawyer for over 25 years and his practice focuses on disability rights and special education law.  He founded the Midwest Center on Law and the Deaf, and served as Board Chair until 2011.  President Barack Obama appointed Mr. Rosenblum to serve on the United States Access Board. 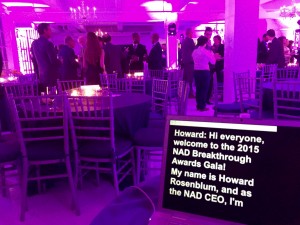 Just to give you an overview, NAD is the oldest national civil rights organization in America, and it is the leading organization advocating on behalf of all deaf and hard of hearing Americans on many issues, including captioning, education and interpreters.

Two of the main people with whom I rehearsed and prompted for were Alexis Kashar and Marlee Matlin.   Both ladies are deaf, beautiful, talented, groundbreakers in their field.   Although I don’t sign, I was able to interact well with them, as they are excellent lip readers, and I am, if I may say so myself, an excellent communicator. The interpreter was able to assist as well. 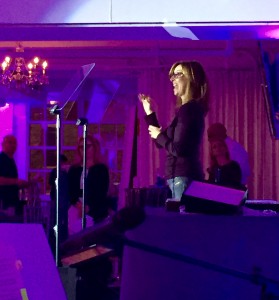 I came to know that Ms Kashar has had an illustrious career as a civil rights lawyer and a very involved member of the Jewish community. She is the president of the board for the New York based Jewish Deaf Resource Center (JDRC). It is a nationwide organization totally dedicated to enabling deaf and hard of hearing individuals to fully participate in Jewish life. Among her many advocacy involvements is one very dear to her heart. She chairs the public policy committee for NAD.

On this particular night, not only was she one of the hosts, she is credited with planning the entire gala. She also received awards for her recent accomplishments. Alexis has broken barriers as a special education and disability rights attorney, and now has turned her attention to innovating new technology to help redefine access for deaf and hard of hearing people.  She is the consummate role model, if ever there was one. 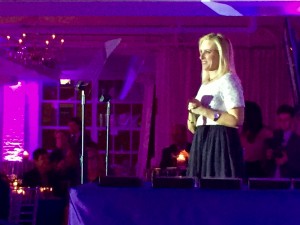 Marlee Matlin, is a world renowned American actress that I knew about. I recognized her immediately and was awed by her beauty and affable demeanor. Throughout her long career she has broken through so many stereotypes and has shown the world that deaf people can do anything they want with purpose and tenacity.

She won the Academy Award for Best Actress in a leading role for Children of a Lesser God. In my research I found out she is both the only deaf actress to win this incredibly prestigious award, and is at the age of 21 the youngest thus far.

She also won the Golden Globe Award for Best Actress in a drama for the same film in 1986. Since then, she has been in several movies and starred in numerous television series.   Marlee has also had four Emmy nominations for her work.

Like Alexis Kashar, Marlee Matlin is a role model worthy of emulation.

The indomitable Ms. Matlin has also shown millions of people, to their astonishment, that deaf people can dance! She did very well on Dance with the Stars. She raised one million dollars in one night as a participant on Celebrity Apprentice. I recently saw Marlee on Broadway in Spring Awakening! I highly recommend it. Go see it!

Back to my work and an important part of the night in question – the challenge of teleprompting for the deaf presenters.

How can you scroll text according to the speed of the presenter signing?

In rehearsals we realized that scrolling the text and teleprompting to the speed of the interpreter would not be a good solution.

This created a delay and confusion.

It became clear that I would have to spend some time training one of the deaf Audio-Visual techs on how to teleprompt.

Luckily, the woman I trained got the hang of text scrolling in about two hours of practice and ended up teleprompting for the speakers who would sign.   I did everything else. Throughout the night I would switch back teleprompting for the other presenters and speakers. This was, by far the most challenging job I’ve had of late. The people involved made it a pleasure.

Just remembered something very funny. Someone on the shoot was talking about Marlee’s sense of humor about her deafness. She’s been known to tell of people calling her and being on the iPhone on Speaker.   After 10 minutes or so they say, “Wait a minute, Marlee, how can you hear me?’” They forget that she always has an interpreter there who is signing to her as they talk. “You know what? I can hear on Wednesdays”, she conveys through the interpreter. Nervous laughter ensues, I am sure.

I hope you enjoyed reading this blog.

See you on the next one!