It is so rewarding to be requested by name to work as a Teleprompter Operator with producers on the yearly premiere of “Inside the NFL” Season 8. Once again I found myself at the CBS Studios on West 57th Street at its main broadcast facility.

I was keenly aware of the importance of this site. History was made here! The origins of CBS date back to 1927. It has an incredible history, much too long and complicated to write about here.

Allow me to mention but a few highlights.

I relish the fact that when Charlie Chaplin (a god among gods) finally allowed the world to hear his voice, he chose to do it over the airwaves of CBS! 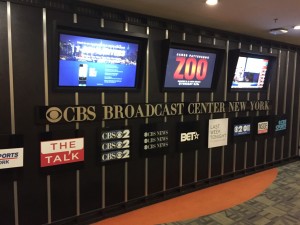 In 1938, CBS was struck by the infamous faux news broadcast of the radio adaptation of H.G. Wells’s The War of the Worlds, performed by Orson Welles. Many people who were listening panicked and actually believed invaders from Mars were attacking!

Soap operas emerged in the 1930s and have remained an incredibly successful source of income and a wide audience for CBS. “Guiding Light”, for example aired on the radio in 1937 and then in 1952 began airing on CBS. Until its cancellation in 2009 it boasted of being the oldest soap opera out there. “As the World Turns”, was another soap opera that aired on CBS for 54 years from 1956 to 2010.

The theory that soap operas declined in popularity because many women who were part of that loyal audience are no longer at home during the day is widely accepted. They are working!

The Miss USA pageant aired on CBS from 1963 until 2002. This same year Donald Trump brokered a deal with NBC. It gave them half-ownership of the pageant. The pageants were first shown on NBC in 2003.

In 2015, NBC and Univision severed their business relationships with Mr. Trump and his company, after the incendiary remarks he made about Mexicans as he kicked off his presidential campaign.

I was fully aware of the history of this place as I mentioned above. I felt a tug at the realization that I was working in the same studio where so many of my late grandmother’s favorite shows were taped. I remembered her fondly and became maudlin at the thought of this amazing connection. I was working on the same spot where those very shows were filmed! Amazing!

I remember my grandmother telling me about one of her other favorite TV shows, “The Price is Right”. It premiered on CBS in 1972. It is actually the longest continuously running daytime game show on network television.

I have to stop going down memory lane and tell you more about my latest adventure in teleprompting.

Again, I had to pinch myself, here I was working for one of my personal favorite TV shows that focus on the National Football League “Inside The NFL”.

This game changing show originally aired on HBO from 1977 through 2008. Then, the Showtime Network picked it up.

It was here that I met producer, Michele Buson. She hired me as the Camera Teleprompter Operator for last year’s promotional throws to all of CBS Sports’ corresponding networks.

And now I find myself working among people I know and respect. To be invited again for the Season 8 premiere of “Inside the NFL” is nothing short of awesome.

Michele and her production team and I worked with my favorite Teleprompter unit, the Professional Autocue Teleprompter System with upgraded HD Proscan Monitors.

I know from previous experience that we would need our QTV Ultra Bright Monitor, so I provided that as well. Given the amount of Kino lights, I knew we would need this particular monitor.

My concern and ultimate goal is to keep the client happy and stress free. I take no chances with potential glare and low light issues with the Teleprompter.

It is also comforting to know that we always have back-up equipment.

All of us at the American Movie Company and Teleprompter Rental have made that a major priority, no matter the client big or small.

This particular promotional commercial was interesting on many levels. I was the Teleprompter Operator for the NFL’s Hall of Famer, Norman Julius “Boomer” Esiason.

Aside from being one of the NFL’s greatest quarterbacks for the New York Jets, Cincinnati Bengals, and Arizona Cardinals, he is the current color commentator for the NFL and the host of “Inside The NFL”.

A color commentator is the person who must have encyclopedic knowledge of the game. He provides interesting tidbits about the players and the ongoing game. They literally fill in any time when the game stops for any reason. Most color commentators have played or coached the game.

They can point out specific details and give statistics. This, of course, helps the audience appreciate the athleticism or strategy involved. The play-by-play announcer simply tells the audience what is happening in the game as it is played. John Madden and John McEnroe are two of the best color commentators. The term “color” refers to the humor and frivolity provided by these announcers. Levity adds color to the game!

I’ve been a Teleprompter Operator for countless celebrities and CEO’s. Boomer is without a doubt one of the most personable, energetic, professional, one-take wonders.

We went through numerous scripts for Verizon, Comcast, and DirecTV. Each line was delivered meticulously with no mistakes.

I will also take some credit for the perfect flow of lines as I always scroll the text according to the speed of the speaker. This leads to a natural performance in front of the camera.

After the shoot, I got to watch part of an episode. It was incredible! The interesting thing about the show is that it has the freedom to stray from the often boring, traditional network format. It is not just like any other sports recap show, but one that features highlights of the week’s games and a full discussion of events around the league.

My favorite part about watching the live taping of Inside the NFL was the fact that there were no commercial breaks. This allowed the panel to discuss football subjects at length without the normal network time restrictions. This was a truly great experience. I look forward to coming back every year.

I also hope you will read another blog from me about the Premiere of Inside the NFL, Season 9.

Teleprompter Rental Goes “Inside the NFL”