It always feels fantastic when asked to come back to do another teleprompter job or rsa animation job.  This is especially true when you are really becoming an integral part of a team.  I am not overstating, I am working with people whose mission is to make the world a more health conscious place.

Actually, I love their stated purpose.  “Our mission is to revitalize the way people eat, move, and live!”

This past weekend, I worked with the wonderfully talented production team at MindBodyGreen.  The deliciously beautiful Dana James was our client.  She is the founder of Food Coach NYC and owner of a nutritional therapy practice here in Manhattan.  Her goal, for this promotional video was to share with the world  her belief that food must be viewed not only as essential and nourishing but as a source of pleasure, in a word, fundamental to wellbeing.

She is passionate about conveying to women the need to break from long held destructive ideas about body image.  Food plays a big role.  It is crucial to know not only what to eat, but to understand why we eat what we eat.  That’s something I never even thought to look into!  She spoke about how eating is often emotional, physical and habitual.  I don’t know if I agree with all of the key points made in the video, but I do believe everyone has the ability, the capacity to transform his/her life in terms of food.  It is not easy, but then nothing worthwhile is.

We filmed eight lengthy scenes for which I was Dana’s personal teleprompter operator.  I was able to work closely with the director and was encouraged to share my most useful teleprompter tips with the talent.  Among the many suggestions, I stressed the importance of making this series of videos as conversational and friendly as possible.  They were receptive to my ideas and Dana took my advice eagerly and did a stellar job throughout the very long 13 hour day. 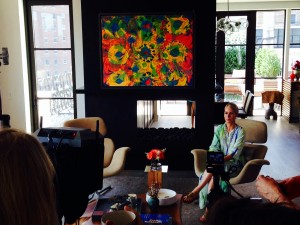 Dana James reading from a Teleprompter

Even though it was her very first time reading from a teleprompter, she was a natural.  She had plenty of experience working in front of the camera but was unfamiliar with the camera-mounted teleprompter I was using.  It can seem intimidating at first.  I promised her I would be with her every step of the way to make her feel at ease and assured her there would be no mistakes.

That’s the whole point of a teleprompter, I told her.  I added that one of the key things to remember is to make the script your own, by feeling confident enough to add a word here or there to make the dialogue as conversational as possible.  We had a lot of material to cover and she became adept at reading the words scrolling on the unit.

The Assistant Cameraman was a real gem as well.  He was professional and proficient.  We worked well together as a team throughout the day.  I never had to worry about the teleprompter head being removed (It has happened) without my permission.

Every time we changed the shot from a long shot, to a medium, to a close-up and a particular lens change was made, I was respectfully called over to remove the prompter glass and then reposition it in front of the camera.

We knew what had to be done and implicitly relied on each other’s ability to make it happen.  It made such a difference in my day.  Personally, I hope to work with that gentleman again in the near future. 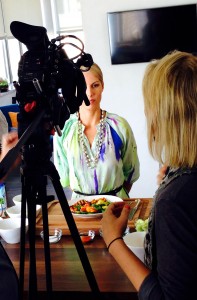 Allow me to get back to the actual content of the commercial.    Dana touched upon America’s addiction to sugar and invited us to discover if we are, in fact, addicted to it.  I found this extremely interesting.  Sadly, I definitely fall under this category.

She continued to remind us of a few signs.  You’re addicted to sugar if you can’t keep sugary foods in the house for fear that you’ll eat them up in one sitting.  You may be addicted if you have ice cream and cookies and know they’ll be gone in a few days.   And… if chocolate lasts more than 24 hours you congratulate yourself.  She also mentioned that it is a problem if  a person is anxious about and even avoids social situations because of food.  There are those who don’t attend special occasions, even weddings because of food temptations.  And dinners out are out of the question because they simply can’t say no to bread or dessert.

Dana made yet another important point.  It had to do with time spent thinking about sugar and how to avoid it.   It’s as though you are at war with it.  The yes/no oscillation, the “I shouldn’t be eating this, but I’m going to, anyway”, this sort of conversation with yourself is a telltale sign.  What follows is the guilt  “Why did I just eat that?”  The self-inflicted blame, the lack of self-control does irreparable harm to self-esteem.

Other points made had to do with whether one continues to eat these harmful foods despite physical and psychological symptoms.

Yet another salient element to consider is whether the idea of taking sugar out of your diet is extremely uncomfortable and causes anxiety and sleepless nights. You might feel like you’re losing your best friend.

And finally, you may discover you are addicted if you’ve tried over time to give up sugar, bread or other carbs to no avail.  If you continually relapse and then punish yourself for doing so, the problem exists.   Extreme measures are sometimes taken.  A strict detox the next day is not always advisable.  To try to compensate this way can do more harm.  Moderation… moderation.  All things in moderation, as the Greeks used to say.

I personally think I live a relatively healthy lifestyle and don’t go out of my way to eat sweets or food with a lot of fat.  I believe that making conscious decisions about what I eat is the important thing.  I probably could lose a good ten pounds.  I could stop eating at the craft table when I’m out on teleprompter jobs, but I enjoy it and the socializing that goes with it.  I am not saying that the food is unhealthy, am just saying that I often eat because it’s there.  I don’t think I overdo it, however.

The thrust of this rsa animate video compilation is to make us think about what we eat and why.

As I’ve said before, I know that moderation is key.  All in all, it was great to work on this project.  It made me think about what I eat on a daily basis and how it can affect me.

I certainly didn’t give it much thought prior to this teleprompter gig.   I’m very grateful that I gained this new awareness.   Maybe I can cut down on some of the unhealthy choices I make throughout the day.  We’ll see about that.  Food for thought!

The location of the shoot was very impressive. 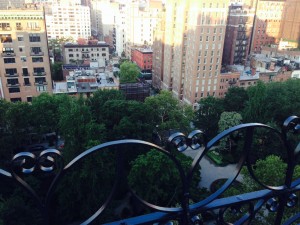 View of Gramercy Park as seen from penthouse

We filmed at 45 Gramercy Park North at one of the most stunning penthouses I have ever had the pleasure of being in.  It is a very green-conscious household with beautiful views of Gramercy Park.  Feast your eyes on the beautiful pictures of this alluring location.  Its owner, a very generous gentleman and personal client of MindBodyGreen allowed the crew to shoot there for free! What a nice man!  I was impressed with his generosity and with his good taste.

In conclusion, I cannot say enough good things about the entire crew and Dana James in particular.

The work of changing and editing lines throughout the day was fun and rewarding.

Well, that’s all for now, folks!  You’ve just been witness to another day in the life of a camera teleprompter operator.

Thanks again for reading, everyone!