Think about the use of a Teleprompter on your next job.  It can only help.

I (Michael Gonzalez) was the operator for a national pharmaceutical commercial for Nasacort.

Close attention on all levels is paid to this sort of commercial.  Every detail is crucial.

The clients had a very challenging goal.  In a very specific manner they had to convey to viewers that Nasacort is (to borrow from their advertising)  the most effective over-the-counter medicine for the treatment of nasal allergy symptoms.

Everything on set contributed to the efficacy of the commercial.  Clearly, the script, the spoken words are the most important.

Please check out the pictures I was able to take on the set.  You will see what I mean.

The color scheme was shiny white and a subtle blue.  The crew members worked closely with the director and producers.   The clients approved each and every shot. 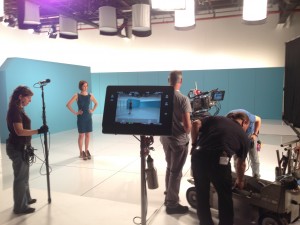 On Set for Nasacort commercial. 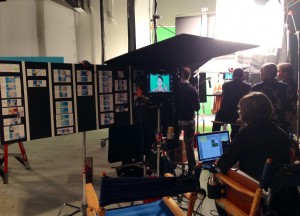 Teleprompter on Set for Nasacort commercial. 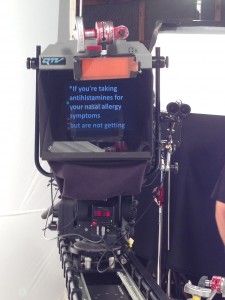 They issue a 7 day challenge and guarantee satisfaction unlike their competitor, Flonase.

The beautiful spokesperson pictured above, reminds us that most people prefer Nasacort to Flonase two to one.  She was so convincing.  I am one of those – a big allergy sufferer.  I believe her.  Now if millions of others react the same way… millions will be made!

If I may digress a bit…

Things have come full circle for me.  About 6 years ago I was the permanent stand-in for Kirk Acevedo on a sci-fi Fox show called “Fringe”.

This television show helped get me into the Screen Actors’ Guild and receive insurance benefits and get a partial pension.  It all happened at the

famous SilverCup Studios in Long Island City, New York, where I worked as a Teleprompter Camera Operator for the shoot today!

I worked with some very nice and professional cameramen who were constantly changing lenses for each specially crafted shot.  I also worked hand in hand with the script supervisor in “video village” right next to the director.  It was a very challenging teleprompter job.  I was working at a very fast pace and under extremely hot lights.  I would run from video village to cue up the next lines of dialogue for the talent to read and then run to the camera department all in a matter of minutes before the director said, “Let’s roll!”.

I consider myself lucky.  One of the most important things I learned from American Movie Company is to be prepared.  I cannot stress enough to my fellow operators the importance of carrying backup equipment in the Pelican case.  One must be prepared to deal with any scenario.  Accidents happen, plans change.  I also always highly recommend formatting the script for the shoot a day in advance.  This will save you precious time and relieve the inevitable pressure you will feel stemming from the demands of both the client and the director.

Sometimes, however, you are not given the privilege of receiving the script in advance, as was the case today!  I had to work at a fast pace but was able to perfectly format the material right before the cameras rolled at 7:30 A.M.

What a day! full of memories in front of the camera and new experiences behind the camera!

Check back soon for what I know will be more exciting days on set as a Teleprompter Operator for the one and only, “American Movie Company”.

Also please check out our new website at TeleprompterRental.com.

If you’ve hired us before, please write a review about us!  Word of mouth is priceless!

Thanks a million for reading.