This past week I worked again with one of my favorite clients, Tristan Marciano, of Hungry Man Productions. He and I worked closely together on a series of internal promotional videos for Jaguar LandRover in 2015, and again most recently for their new SUV vehicle lineup for 2016.

Mr. Marciano was the production manager for this particular job – a new national commercial for Nabisco. He was in charge of hiring the crew and chose me as the camera Teleprompter operator. I was so happy to get his call and eager to embark on a new adventure.

The shoot in New Jersey was about an hour and twenty minutes by car from our NYC studio. I was lucky in that my call time was later in the day, so I was able to avoid rush hour traffic. I also prefer taking my vehicle to the set, especially if the distance is far. This allows me to bring along all the necessary backup equipment, including an additional AutoCue Ultra Bright Monitor, extra cabling, and our trusty Manfrotto 560 series tripod.

I arrived at a beautiful Victorian style home and was greeted by a production assistant and given specific directions as to where to unload my equipment and safely park my car. Once I entered the home, I staged my gear next to the camera crew and looked for Mr. Marciano. I found him in one of the many bedrooms of the home, now converted into the official production office.

He was happy to see me (as I was to see him). He stopped his work and introduced me to the Producer of the commercial, the director, the 1st AD (assistant director), the DP (Director of Photography), and the 1st AC (Assistant Camera Woman). It was with her that I would be building our camera and teleprompter rig.

About an hour after my arrival, I met the irrepressible Dr. Ruth. We spent some important prep time together. We went through all of her lines and did some updates with the approval of the agency’s representative on set. The commercial consisted of two 15 second versions and two 30 second versions. I worked closely with our script supervisor as well, to ensure that my prompting was precise and accurate within the allotted time for each version of the commercial.

For this particular shoot we provided our 12 inch Autocue standard teleprompter with the Autocue black mounting bracket, 3 part gold pate sliding system with 15 mm extension rods and our signature QTV ultra bright monitor. The latter was specifically requested by the producer because of Dr. Ruth’s poor eye sight. We shot on a beautiful Arri Alexa XT and on Anamorphic Zoom Lens. We built a very impressive rig, if I say so myself.

Check out these pics! 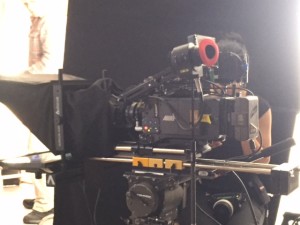 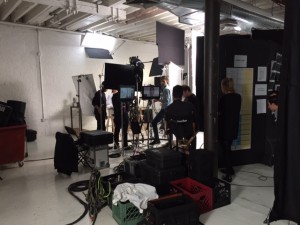 The commercial was about Nabisco’s “Good Thins”. They are sort of like the popular Wheat Thins snack, only healthier.

Dr. Ruth is such a sweet, irreverent, unfiltered, diminutive, 87 year old lady. She spoke her mind on a number of subjects throughout the day. 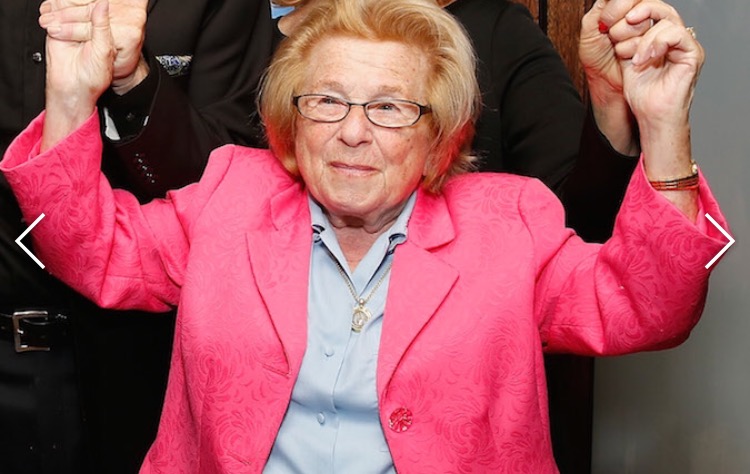 At one point during the shoot she blurted out, “The quicker we get this commercial finished, the better all our sex lives will be!” She said that as a joke, of course. Her outburst lightened the mood of this very serious shoot. There was lots of pressure stemming from Nabisco’s advertising agents.

Honestly, I had hoped she had been a bit more risqué. I’ve heard her and have been happily shocked by her when she’s been a guest on the Howard Stern Show. Here, she remained demure and very professional.

Dr. Ruth came into prominence in the 80’s. She had a radio show called “Sexually Speaking”. Apparently, her rise to fame began in the early 60’s when she took a job at Planned Parenthood in Harlem. It was inevitable that discussions about sex would arise. She found herself speaking graphically about the subject without resorting to the usual euphemisms. She saw the dire need for sex education and frank talk about contraception. She was offered a radio show, Sexually Speaking, which became an immediate success and gained a loyal following. It fulfilled a need, not only for accurate information but it became a safe place for people to ask personal questions about sex. Conservative critics were judgmental. They did not approve of her advocacy of contraception and sexual openness. She remained undaunted. She’s reached millions through radio, television and books. She’s contributed to “sexual literacy” around the world over the last several decades. Dr. Ruth has received countless accolades and honorary degrees from prestigious universities. She continues to educate and free people from sexual repression.

It was an unforgettable day on the set with Dr. Ruth, a woman who long ago broke the barrier about a taboo subject, sex. She raised the question about what’s socially acceptable to talk about openly when it comes to sex in America.

Today, given the Internet, YouTube, and other social media, nothing is off limits!

Thanks, as always, for reading.   I am looking forward to seeing you on the next blog!

I would also like to thank our phenomenal chief editor and AMC Producer, Carmen Ventura.  Love to Producer Parm Girn and Bill Milling, the man himself, as well!