Richard Branson: Man of the Century?

Richard Branson is a Knight and he deserves our respect.

When you think of Richard Branson, what do you picture?
If you are at all familiar with this CEO, you immediately picture his lionesque visage, blonde locks, and enigmatic smile.

Needless to say the list goes on and on. He’s an entrepreneur on the grand scale.

AND he’s one of my heroes.

So when we get a call that Virgin Air needs a teleprompter, I just cross my fingers and hope that I’m going to prompt for Richard Branson.

Some dreams really do come true.

Sir Richard didn’t have much time, so it was a quick in and out. But he was still charming. He’s definitely a force of personality.

Richard Branson reads off the prompter like a champ. Of course being who he is, I expected nothing less. If more executives could learn a tenth of what Sir Richard knows about media production, they would all shine brighter. He knows a bit about framing, about lights, about sound, and about teleprompting.

That makes Sir Richard Branson wonderful to work with.

Richard Branson’s autobiography is titled Loosing My Virginity, and is available wherever books are sold. 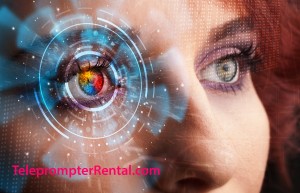