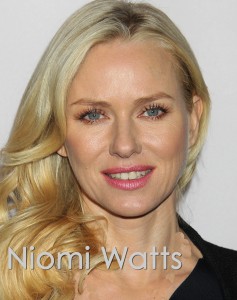 Of course, you knew Naomi Watts is beautiful, that’s nothing new

One thing you may not know about Naomi Watts is that she is incredibly approachable.

Naomi and Valerie Plame-Wilson, the inspiration/real life character that Naomi played in “Fair Game” were shooting a PSA against Nuclear Proliferation.

There an amazing amount of of money tied up in Nuclear Arms.

Countdown to Zero is the “Inconveient Truth” of Nuclear Films.

Naomi Watts would want you to watch it, I think you should as well.

Besides all the nuclear threats, I learned other things on this shoot.

When you are filming in a photo studio, sound was not taken into consideration. The air conditioner could not be turned off! Needless to say, the sound guy was grumpy.

Another fun thing, when you are shooting in a studio with BIG windows, people walking on High Line Park like to stop and see what you are doing.

Working in this business, I often forget how much it intrigues people. Whether on the street or in a studio, passersby will stop and stare, and try to figure out what is going on. It’s funny to me, but I do love TV and movies as much as those people, so I’m empathetic.