Errol Morris: Inventor Of The Interrotron

Errol Morris, an incredibly prolific American filmmaker and documentarian, invented the Interrotron. The word was formed by combining the notions of terror and interview. Most people feel extreme fear (terror) at being on camera being interviewed. (Note: the word is sometimes misspelled as interritron, interratron or a variation).

In an interview published in FLM Magazine, Morris explained that what he always wanted to achieve in his films was true eye contact between the interviewer and his interviewee.

We all know the importance of looking a person in the eye. Eye contact occurs when two people look at each other’s eyes at the same time. Looking directly at someone’s eyes does several things – it exudes confidence, it gives the viewer emotional information, it makes it more difficult to elude, to be cagey, to lie.  In fact, using the Interrotron, is as if the interviewee is watching television and curiously the effect is less intimidating – it accomplishes the original aim – it gets the person to speak freely. Essentially, the two people involved are looking at each other’s live images. In fact, they are not looking at each other. Morris in an interview with Scot Paley of 60 Minutes, spoke of the Interrotron and its value. To paraphrase – he said that it gives him the ability to create an interview where someone is talking to him and it’s as though they are talking directly to the audience. He adds that eye contact is incredibly important. We all recognize the power of that connection when it happens.

If I may go off on a tangent – I just heard Vice-President Joe Biden say “…look them in the eye”. He was referring to the 14 senators or so who are now standing in the way of bringing comprehensive gun control legislation to a vote. The idea, of course, is that if those lawmakers were to meet eye to eye, face to face with the parents of the children slaughtered by a madman at Sandy Hook, they might find it more difficult to say no to gun control. Common sense will rule, sane people expect.

I now return to our topic – the Errol Morris Interrotron.

Morris recalled that when he directed “Gates of Heaven” in 1978, (about the pet cemetery business) he was not happy about his interviews. Those interviewed were not looking directly at the camera lens – it always seemed they were looking just a bit to the side. Morris’s head was right next to the lens and that’s where they were looking. He wanted his subjects to look him in the eye. He wanted mutual eye contact. His image had to be where the lens was. But how could that be done? 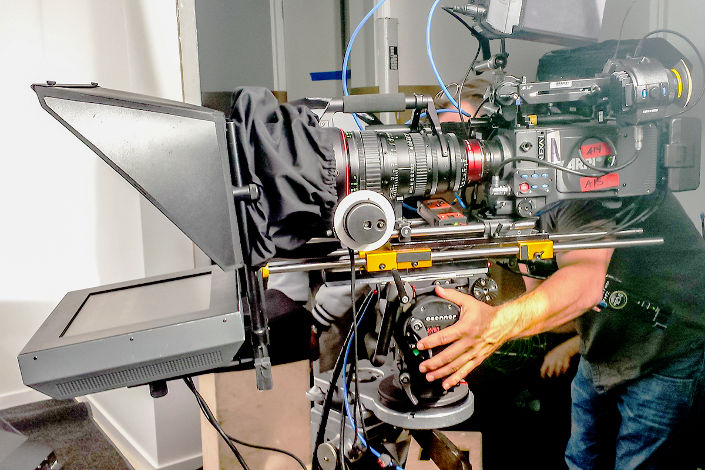 He found a way. The Interrotron was the answer.

But, let’s step back a moment and talk a bit about the Teleprompter. For the few out there who don’t quite know how the Teleprompter works – it displays text – an image is projected on a two-way mirror. It is widely used by both politicians and newscasters. They look directly into the lens and read text at the same time. No one had thought of using it for anything else, amazingly enough. Morris had the idea of putting his face on the Teleprompter or more accurately, a live video image. In essence, he was then able to be talking to someone, and he/she could respond and look directly into the lens of the camera. There was no distraction, no looking to the side. There was true eye to eye communication. Contrary to preconceptions, rather than intimidating people it makes them feel at ease. It seems they are speaking directly to the interviewer. The Interrotron creates intimacy. The exchanging and imparting of information is simplified.

Eye to eye – the truth is revealed.

The Story of the Errol Morris Interrotron

How Errol Morris Invented The Interrotron