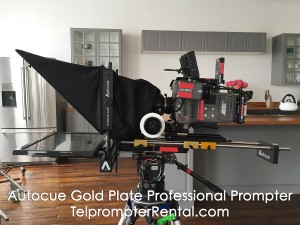 Do you remember the really horrible (teleprompter free) advertising of the 80’s?

How old are you?!

Anyway, when I was a lad, local commercials were hilariously bad.  It was obvious they were reading from cue cards, or were just plain uncomfortable in front of the camera.  These commercials would occasionally be for local attorneys, restaurants, even car washes!

They were shot poorly and even more poorly performed.  Even today the average person knows little about how to “perform” in a commercial, even if playing themselves.  They are gripped by fear.  It overwhelms them, and they become stiff, in a word, terrorized.

Today we have many advantages over our video tape counterparts of yore.  The digital revolution has taken the cost of multiple takes out of the picture.  Flat Screen Technology has completely changed the game for teleprompters.

Years ago, a teleprompter was paper on motors. So not only did it have the possibility of shaking the camera, but also think of the noise!

Then came the advances in the CRT, or Cathode Ray Tube.  Although they got “smaller” they were still heavy.  Easily 50 pounds for a decent size monitor.  This is not portable.  Staying put in a studio?  Not a problem, but going out on an average commercial shoot?  As is said in New York “fuhgetaboutit”.

This isn’t from the 80’s, but it’s awful, and could have used a teleprompter, on top of other things. . .

Now we have flat screen TVs.  And while the average consumer version does come with a VGA input, they may not be the best for teleprompter.  Why?  Consumer televisions are designed to watch television! I know, it’s a big surprise.  They aren’t terribly bright, and the contrast isn’t very high.  Professional monitors, not only are constructed to be lighter and more compact than your average television, but are brighter and have higher contrast.

You need that text on the teleprompter to be very bright and clear.  Why?  One big factor is the distance from whence you are reading the text, but the largest factor is because it has to be reflected.  That’s right, the throw of the monitor and contrast of the light is cut when it bounces off of the slivered glass.  Why? Because it’s not a true mirror.  The silvered glass has to be shot through from behind and be practically invisible.

So what do all these advances in technology have to do with the quality of commercials?

The cost of a teleprompter is significantly less than it used to be and the transportation ability of a teleprompter is unlimited.  You can take it anywhere.  I’ve been out in fields, on boats, in conference rooms, and up two story ladders into giant clock towers.  Yes, I have actually done all of those.

Now, even the lowest budget commercial can use a teleprompter, and while the delivery may not be great, at least the words will be correct.  It gives a level of professionalism that the early days were missing.

Check out this Antoine Dodson commercial.  I actually ran the teleprompter for it.  Isn’t this way better than that horrible earlier commercial?

I thought so.  I know you agree.